On 10 and 11 December 2013, The Hague hosted the sixth innovating justice forum. Experts from all over the globe came up with strategies and innovations for the future courts. In cooperation with HiiL- the organisers of this market place for building the courts of the future – platform Gras invited creative professionals to present ideas on what future courts look like.

Solve your problem in court

When this problem (legal as well as non-legal) can be solved, the chance that there will be a new judicial problem in the future, decreases. The current system focuses on the past, while the problem solving court is of a preemptive nature and looks to the future. A problem solving process is not the same as mediation. A problem solving process is public, led by a judge and not without obligations. The judge serves both as decision maker and facilitator of the dialogue. Also, the judge can ask various other parties, like probation officers or social workers, to participate in the process.

Instead of the abstract legal system, the parties in the conflict, being the defendant and plaintiff or victim, are central. Parties do not only talk to the judge, they enter into a dialogue with each other. Instead of following the traditional dominus litis, other parties can bring forward related topics. The energy should not go in convincing the judge by enlarging the problem, but in solving the root cause of the problem. The outcome of the process might be an agreement between both parties, is social in nature with an apology from the accused and a compensation for the victim, or the court can be punitive as well.

Focus on the courthouse of the future
Our team focused on the design of a courthouse in The Hague, the Netherlands on the plot of the Ministry of Foreign Affairs, that will soon be moved to another location. As designers, we chose a specific location to relate the building to the context of the city. In the courthouse all regular cases take place. There will be no distinction between administrative, criminal and civil law because these might be integrated into one case. The problem solving court is part of public society and needs to be close to the people with a decentralised system. We think there will be central locations where cases take place which contain no specific local aspect. Next to the courthouse there can be mobile local courtrooms for cases with a local aspect, and which do not involve detainees. For example, a conflict with the municipality (Court on location). In case of a physical local aspect in a neighbour conflict, the judge can go to the specific location (Judge to the problem). 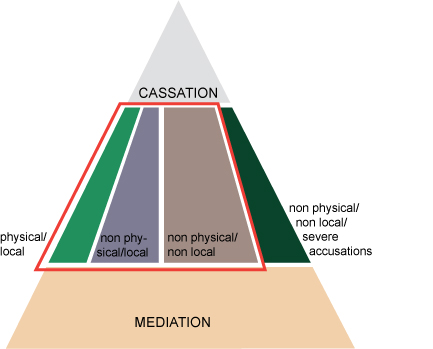 The structure of Dutch courts is now dictated by the separate corridors for judges and the other users of the court. The large integrated office buildings for judges and also public prosecutors define its generic appearance. Since parties are more equal in the problem solving process, there will be no separate circulation systems and the office buildings will be disconnected from the court building itself. By this transformation the courthouse will be smaller, but its identity is much stronger containing only the courtrooms and related public space. 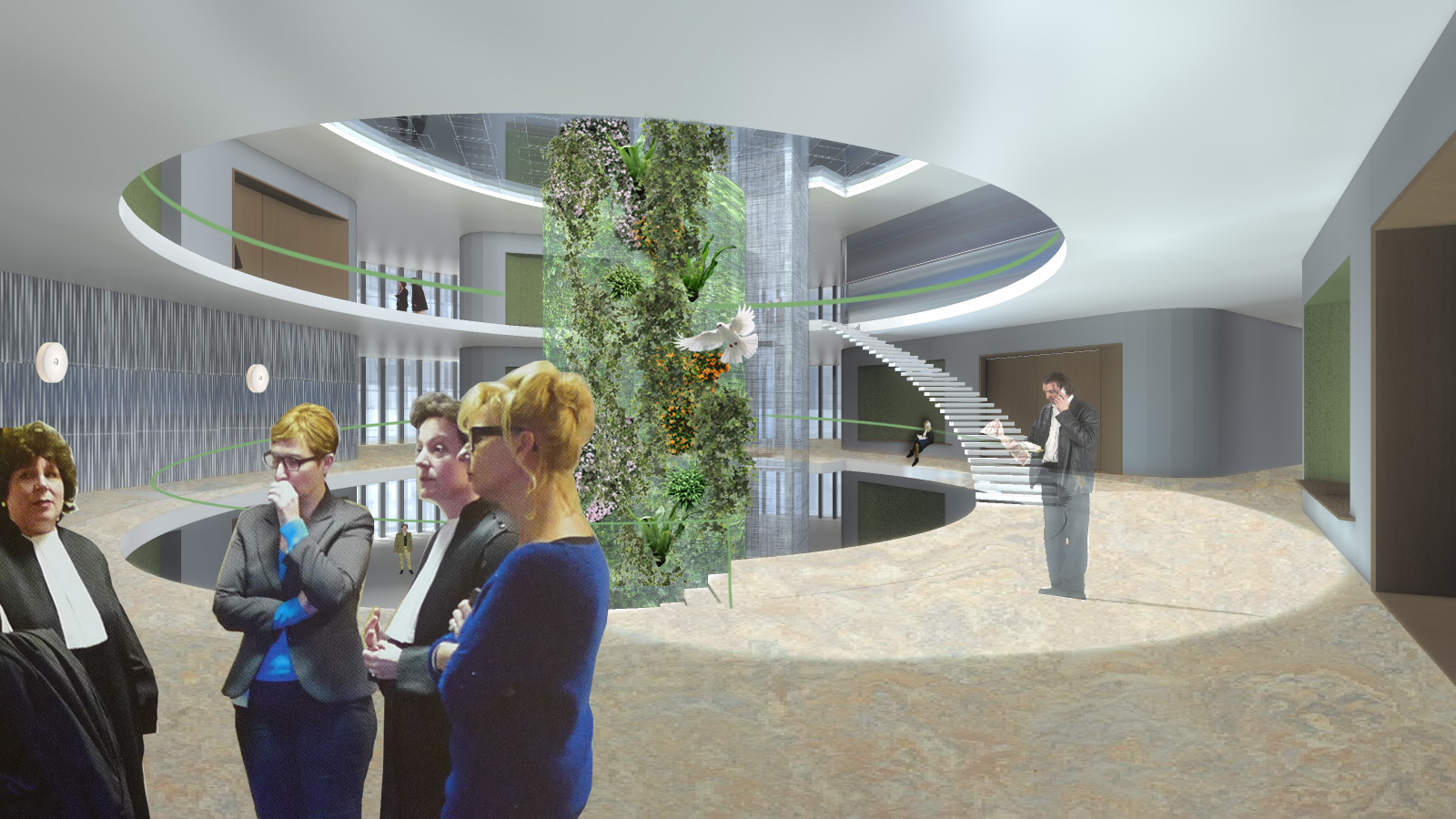 The courthouse is distinct in being a public building. We propose a big greenhouse, symbolizing its public nature. Most general public space is on street level; its use is visible from outside. The courtrooms are clustered in three cylinders in the upper layers, with meeting and waiting areas around the courtrooms. The building is structured by voids with hanging gardens. The identity of the building is formal in a friendly way.

Circular setup of the courtroom
The communication between parties, as well as the amount of parties needed to solve the problem, will be reflected in the layout of the courtroom. To facilitate the dialogue, the setup is a circle. People can look at each other, but can also look away. There is no special entrance or plateau for the judge or prosecutor. The judge derives his authority from the added value of solving the problem in a fair and thorough manner. 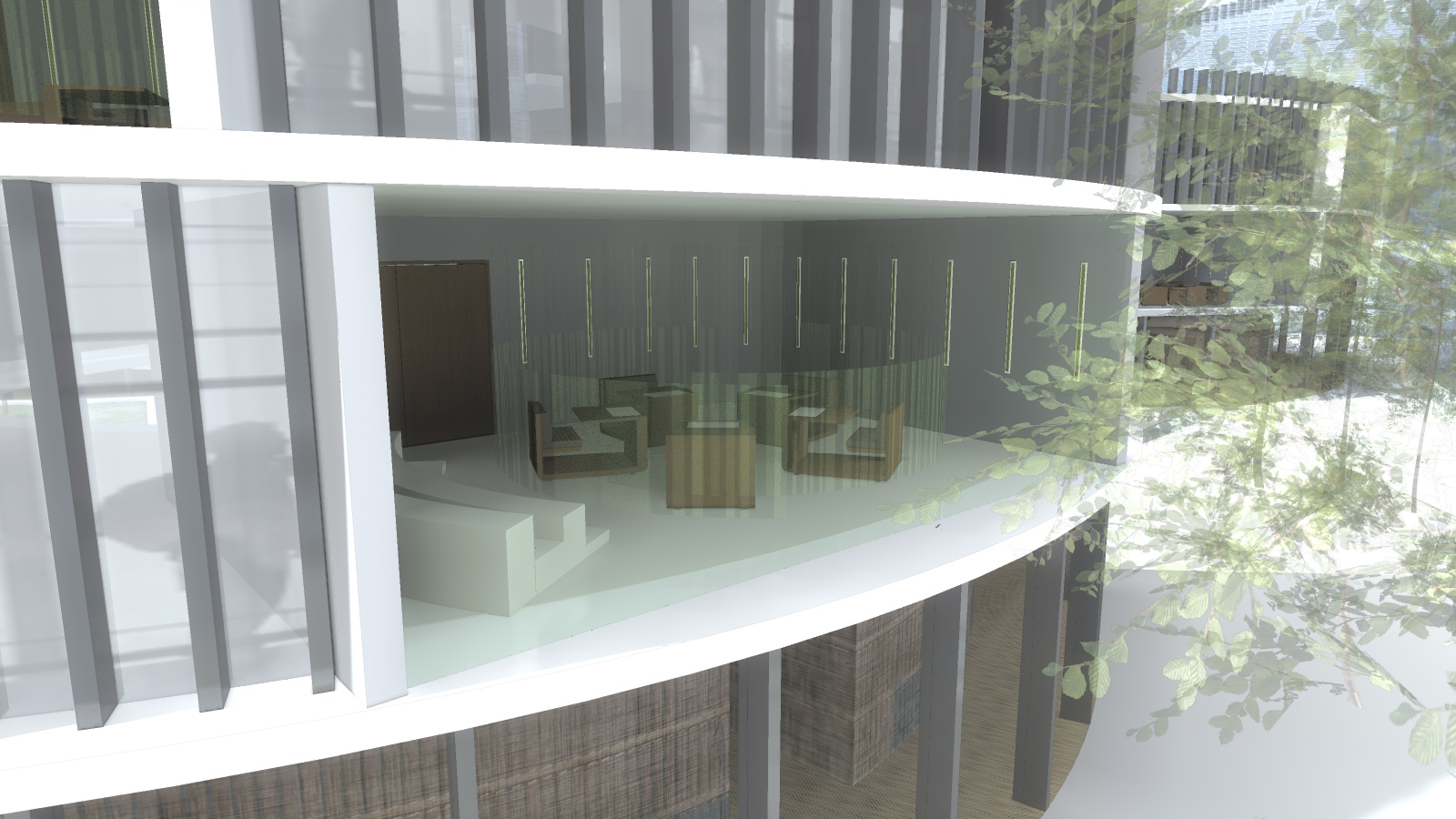 Our starting point for the design is that the form and size of the room influences the atmosphere and can be used as a psychological tool. A judge is able to adjust the room to improve the communication between parties according to the specific case. The room can be bigger and parties sit further apart when there is a lot of tension, but the judge can make the room smaller to put pressure on parties to come to an agreement. In essence, the room functions like a pressure cooker.

The size of the room should accommodate the dialogue as much as possible. Therefore, the room is easily made bigger or smaller by a curtain. If there are only four people present, the room can be smaller than when there are eight parties with public. There are two different courtroom sizes to accommodate various amounts of people in an appropriate way. The amount of movable chairs in the circle need to be adjusted to the amount of participating people in the dialogue.

Informal public space is central
The judicial and underlying socio-economic problem is not limited to the courtroom. The public space around the courtrooms in the new problem solving court is very important to accommodate the dialogue between the various parties. The tone in the courtroom is influenced by what happens in the hallways. Public space is no longer just a beautiful corridor to get to the courtroom. This space is informal and stimulates social interaction. It needs to be more differentiated so that everyone can choose the right space for the specific moment. We want to create space where people see each other and meet easily, but also more private half open places to hide emotions and to talk about delicate matters. This requires the right dimensions, acoustics, light accentuation, orientation and use of materials.

After entering there will be a coffee corner and cantine. There are also meeting rooms and flexible workspaces where lawyers and judges can work in between cases. Around the clustered courtrooms there will be comfortable half open spaces and narrow bays to have some privacy while waiting for the trial to begin. There are meeting rooms as well as informal open spaces to discuss the process during a suspension in proceedings or after leaving the courtroom. 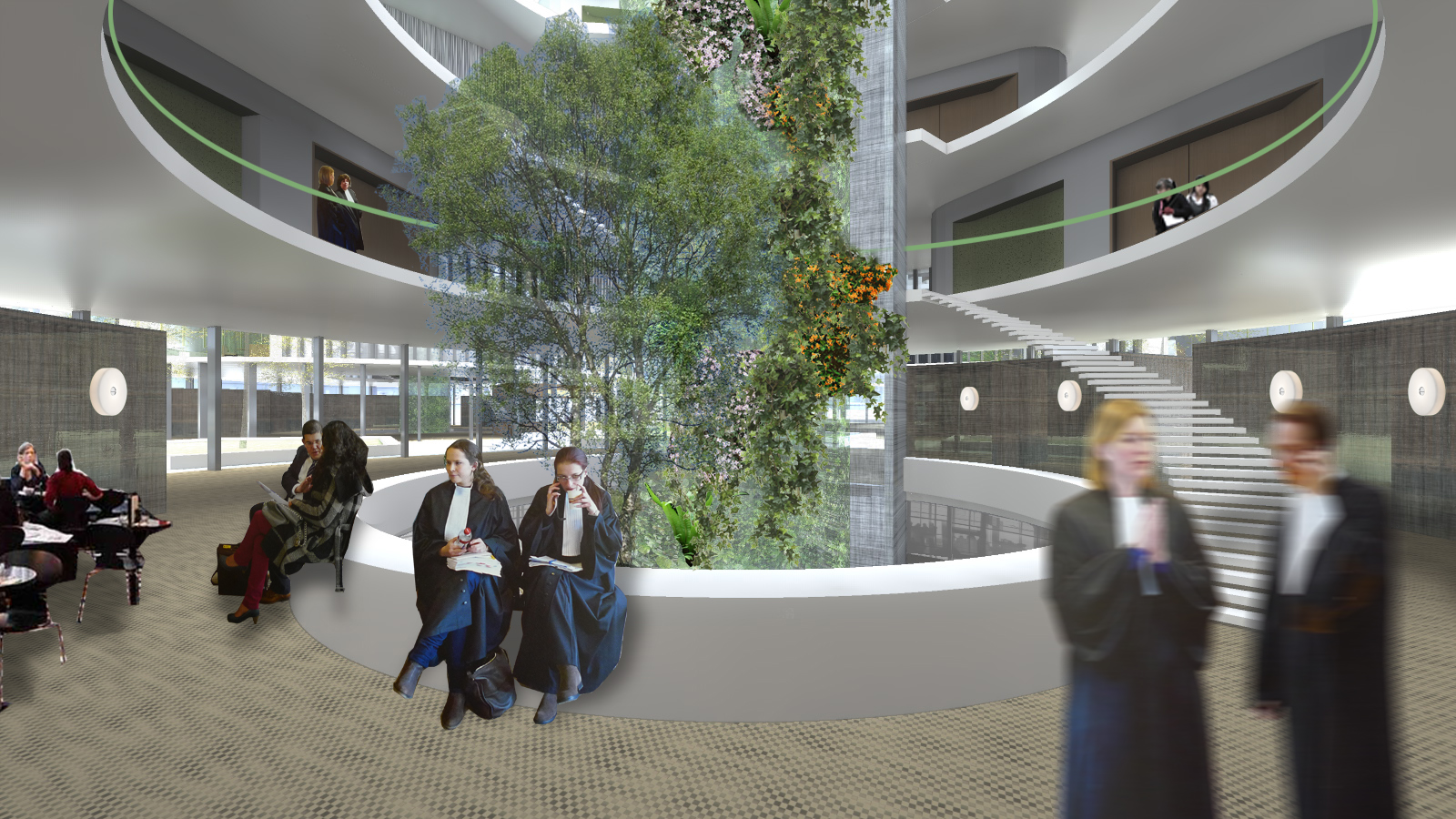 The design of the public space is based on the use and experience by its different users – the judge and all other parties, except defendants in custody. Everyone can use the building in his own very different way. To keep the neutrality of the building, there are no commercial aspects determining the atmosphere in the building. The court bailiffs have an important role as host. Our team uses plants to make the building friendly and let people feel at ease.

The building has a clearly marked entrance. This portal marks the transition to a special domain and has a symbolic value. Portals ritualise social manners. They tend to have a reassuring effect and decrease egocentrism. By making the façade of the building extraordinary it is clear that by entering the building, something important is going to happen.